This morning, the National Bobblehead Hall of Fame and Museum unveiled limited-edition bobbleheads of John Lewis standing on the historic Edmund Pettus Bridge. The first bobblehead features the 1965 version of Lewis the civil rights activist wearing a white shirt, tie, beige trench coat and backpack The second bobblehead features an older version of Lewis the U.S. Congressman wearing a blue suit with his arms crossed.

The National Bobblehead Hall of Fame and Museum will be donating 10% from every bobblehead sold to the National Civil Rights Museum in Memphis, Tennessee. Established in 1991, the NCRM is regarded as one of the nation’s premier heritage and cultural museums. It is located at the former Lorraine Motel where civil rights leader Dr. Martin Luther King Jr, was assassinated on April 4th, 1968.

Each bobblehead, is individually numbered to 2,021 and they are only available through the National Bobblehead Hall of Fame and Museum’s Online Store. The bobbleheads, which just arrived and ship now, are $25 each or $45 for the set of 2 plus a flat-rate shipping charge of $8 per order. John Lewis Bobbleheads 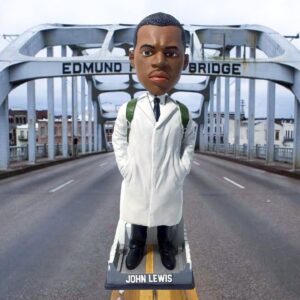 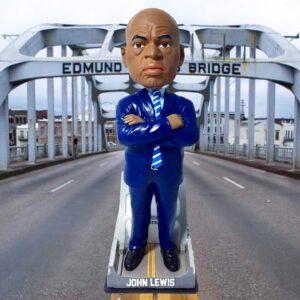 On March 7th, 1965, a pivotal movement in the civil rights movement occurred when roughly 600 marchers were met by state and local lawmen after crossing the Edmund Pettus Bridge in Selma, Alabama. The lawmen attacked the marchers with billy clubs and tear gas as television cameras rolled and still images were circulated in print media around the world, earning the event the nickname “Bloody Sunday.” One of the leaders of the march that day was a 25-year-old Lewis, the chairman of the Student Nonviolent Coordinating Committee who suffered a fractured skull from a beating he received. Demonstrators were attempting to march to the state capital in Montgomery. It was one of three Selma-to-Montgomery marches for voting rights, and the efforts ultimately led to passage of the Voting Rights Act.

The son of Alabama sharecroppers, Lewis grew up to help change the world with his passionate belief in justice. After experiencing the injustice of segregation, Lewis was arrested more than 40 times during his days of civil rights activism. As the chairman of the Student Nonviolent Coordinating Committee, he was one of the “Big Six” leaders of groups who organized the historic March on Washington in 1963. As a Democrat, Lewis represented Georgia in the United States Congress from 1987 until his death in 2020 and was the first Black lawmaker to lay in state at the U.S. Capitol Rotunda. Prior to his death, Lewis was awarded the Presidential Medal of Freedom by President Barack Obama in 2011.

“We are honored to release these bobbleheads of the iconic John Lewis who has been an inspiration for so many people across the globe,” National Bobblehead Hall of Fame and Museum co-founder and CEO Phil Sklar said. “As a leader of the civil rights movement, Mr. Lewis was front and center at many of our nation’s pivotal civil rights moments, including the ‘Bloody Sunday’ march across the Edmund Pettus Bridge in Selma, Alabama, in 1965 and we think these bobbleheads will be a great way to honor and celebrate him.”