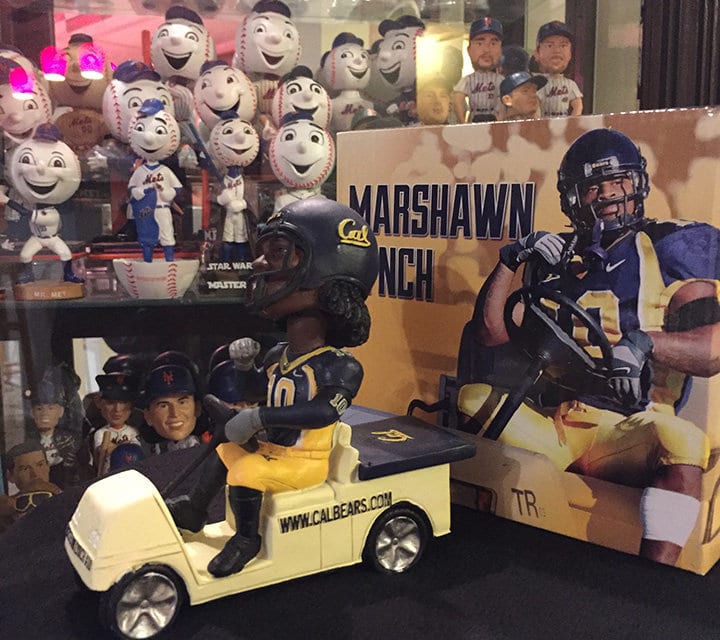 The jig is up with the Marshawn Lynch bobble. Everyone wants it and I characterize this bobble as a “sneaky” bobble. You know why? It was not marketed like it should have. The California Bears posted it on their website a few weeks prior to giving it away and SportsCenter did a 10 second clip on it the day before the bobble. Cali was very sneaky about this one. But once the game was over, many many people somehow scored anywhere between 8-15 Lynch bobbles and made a fuck ton of money selling them on Ebay. They are still selling for well over a $100.00 and will not be any cheaper anytime soon. Those sneaky Cal Bears.

I’m not going to go into the story of Marshawn driving the cart after the Bears won the game in dramatic fashion because I’m sure if you’re reading this, you know the story.

BD&A did a hell of a job on this one. First off, the colors of the cart is identical to the one he drove around the field like a fucking maniac. There’s a piss ton of detail as the manufacturer made sure to put his football gloves on him which is fresh. He’s in his Cal Bears uniform and I love the navy blue and yellow colors. I really dig the extra effort put into this one as he’s got his right arm in the air like he’s straight pimping the ride! He’s got his legs all spread out like he owns the fucking road! The dread locks look really hard and I’m glad they tossed his helmet on for this one. In addition, I’m pumped they put his name and number on the front of the cart for displaying purposes in case you want to display it straight on.

Most companies ask sponsors for permission to put their logo’s on a product, and I am pretty sure BD&A did not ask Nike to put the “Swoosh” sign on the front of his jersey but they did and it looks awesome. 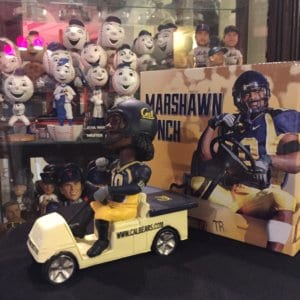 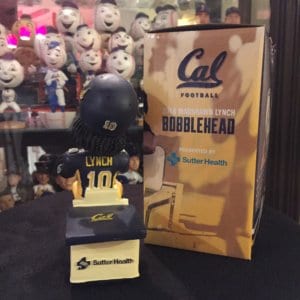 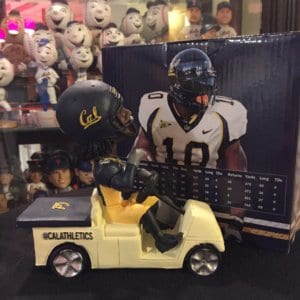 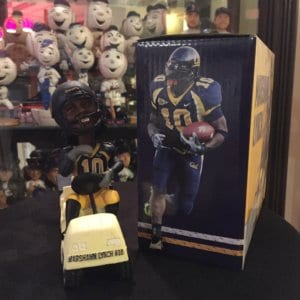 Sniper Rating: Do you want to know another reason why the Cal Bears are sneaky mother fuckers? How about them putting their website on the side of Marshawn’s cart? www.calbears.com. Oh, and how about flashing their Instagram feed on the back side of the cart? @calathletics. Those sneaky bastards. I’m sure they upped the ticket price for this game too. At the end of the day, you NEED this one in your collection. College football teams typically don’t give a bobble out to fans because a program like Cal doesn’t need to advertise to fill their seats. Consider this one a gift Snipers. Yes, I know it’s an expensive bobble but maybe you’ll get an Ebay gift card in your stocking this year. I was fortunate enough to have a buddy out in Cali that scored me one.

I almost forgot a huge component to this bobble. The box! The box is total bad ass. It’s just splattered with photos, colors and awesome images of Marshawn. Could the Bears just have made it a plain white box and saved some money in the labor aspect of creating the bobble? Yes. But they didn’t. They went the whole way and put in the funding to make this right. Job well done. Marshawn and his crazy post game cart driving skills makes this a 10.0.

Get this one Snipers. 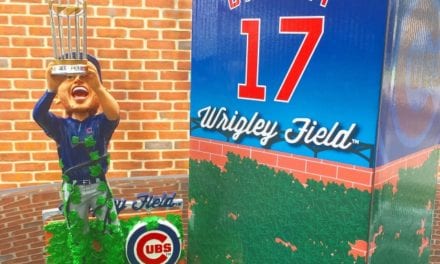 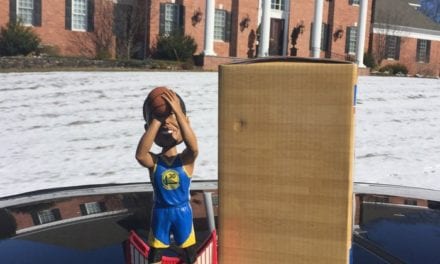 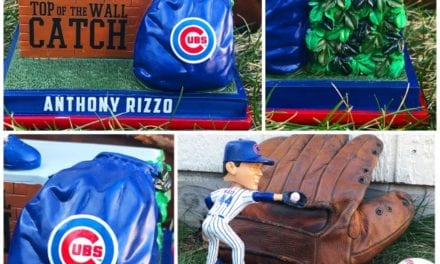 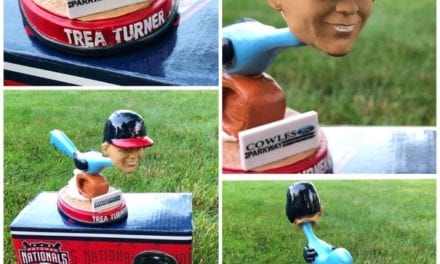