The other day I had a long conversation with a good buddy of mine who’s a huge bobblehead collector. In the midst of discussing all types of topics relating to bobbles, I made it a point to highlight a strong feeling that I’ve had about Day of the Dead bobbles. I proceeded to explain that the myriad of Sugar Skull bobbles that we as collectors have seen the past 4-5 years has been enormous in terms of collecting. I made the statement to him that the theme of the Day of The Dead will never go out of style and will ALWAYS remain collectible for one reason only. It’s a sentimental cultural thing.

The Day of the Dead in Spanish (Dia de Mertos or Dia de LOS Muertos) is a cultural holiday. It’s been embedded as a Mexican holiday and is widely celebrated. It basically involves family and friends gathering to pray for and to remember friends and family members who have died. It’s more or less a commonly portrayed day of celebration rather than mourning. So in a nutshell, whether you are of Hispanic decent or not, people all over the world celebrate this holiday. 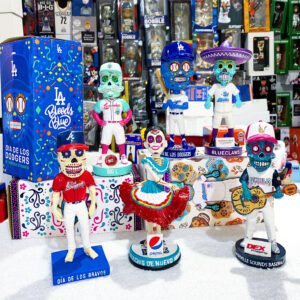 Collector’s including myself have been in awe of the Sugar Skull bobbles that have been given out the past few years and the theme won’t stop. It never should. Everything from the bright colors to the pinpoint detail of the floral designs to precision accuracy of the pearly white teeth.

If you’ve been in the bobble game long enough, you damn well know bobblehead theme’s have died down dramatically. For example, the Game of Throne bobbleheads are an afterthought, Star Wars themed bobbles aren’t as popular anymore and the Stranger Things bobbles were never a hit to begin with. With that being said, I can assure you Sugar Skull bobbleheads will live on as they are just downright insanely collectible. You can never go wrong with a Sugar Skull bobble that sits in your display cabinet whether you celebrate the holiday or don’t even understand the holiday.