This morning, the National Bobblehead Hall of Fame and Museum unveiled an officially licensed, limited edition bobblehead featuring University of Florida mascot “Albert E. Gator” and University of Georgia mascot “Hairy Dawg” squaring off as rivals ready for battle. This is the first bobblehead celebrating the rivalry, and the release comes ahead of the rivalry game this Saturday when the fifth-ranked Bulldogs take on the eight-ranked Gators in Jacksonville, Florida. The bobbleheads were produced exclusively for the National Bobblehead Hall of Fame and Museum by FOCO, an official licensee and manufacturer of Florida, Georgia, and NCAA merchandise. 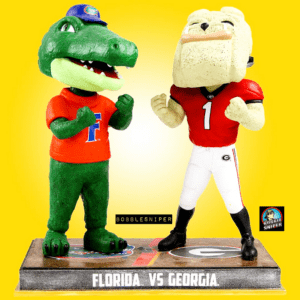 Each bobblehead is individually numbered to 1,000 and they are only available through the National Bobblehead Hall of Fame and Museum’s Online Store. They are in stock and ready to ship. The dual rivalry bobblehead, which just arrived and ship now, is $60 plus a flat-rate shipping charge of $8 per order.

One of the most prominent rivalry games in college football, the two universities do not agree on when the rivalry began. Georgia contends the first meeting was in 1904, while Florida said it was 1915, since the team that played in 1904 was from the Florida Agricultural College based in Lake City. The Florida Legislature established the University of Florida the following year and the football team was officially established in 1906.

Nevertheless, the Bulldogs, who have won the last three matchups, lead the tightly contested all-time series, 53-43-2 according to Georgia and 52-43-2 according to Florida. Since 1933, the big game has been held in Jacksonville, Florida with only two exceptions, making it one of the few remaining neutral-site rivalries in college football. The schools are also major rivals in other sports including basketball where the schools have met 217 times. Just like in football, the rivalry is fairly even, with the Gators holding a 116-103 lead in the all-time series.

“We’re excited to release this bobblehead commemorating the rivalry between Florida and Georgia,” National Bobblehead Hall of Fame and Museum co-founder and CEO Phil Sklar said. “The annual clash in Jacksonville is one of the most anticipated college football games of the season and we think this bobblehead will be a great collectible for fans, students, and alumni of both schools.”