The Hall Celebrates Groundhog Day With A Mantle Mate Bobblehead 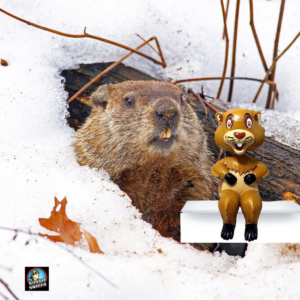 The bobbleheads are currently only available through the National Bobblehead Hall of Fame and Museum’s Online Store and at the museum in Milwaukee. The bobbleheads, which just arrived and ship now, are $25 each plus a flat-rate shipping charge of $8 per order.

Groundhog Day is a popular North American tradition that is observed in the United States and Canada on February 2nd. The day derives from the Pennsylvania Dutch superstition that if a groundhog emerging from its burrow on February 2nd sees its shadow due to clear weather, it will retreat to its den and winter will persist for six more weeks. However, if the groundhog does not see its shadow because of cloudiness, spring will arrive early.

The Groundhog Day ceremony held in Punxsutawney, Pennsylvania, centering on a groundhog named Punxsutawney Phil, has become the most frequently attended ceremony while other places in the United States and Canada also have held similar events. The earliest mention of Groundhog Day is an entry on February 2, 1840, in the diary of James L. Morris of Morgantown, in Pennsylvania Dutch Country.

The first reported news of a Groundhog Day observance was made by the Punxsutawney Spirit newspaper of Punxsutawney, Pennsylvania, in 1886 when they reported, “up to the time of going to press, the beast has not seen its shadow”. However, it was not until the following year in 1887 that the first “official” Groundhog Day was commemorated in Punxsutawney, when a group made a trip to the Gobbler’s Knob part of town to consult the groundhog. People have gathered annually at the spot for the event ever since, and the groundhog was named Phil in 1961. Clymer Freas, who was city editor at the Punxsutawney Spirit, is credited as the “father” who conceived the idea of “Groundhog Day”. It has also been suggested that Punxsutawney was where all the Groundhog Day events originated, later spreading to other parts of the United States and Canada.

“Our Mantle Mates Bobblehead Series has been very popular, and we’re excited to be adding the groundhog to the lineup on Groundhog Day,” National Bobblehead Hall of Fame and Museum co-founder and CEO Phil Sklar said. “It’s always fun to see whether the groundhog sees its shadow and we think this bobblehead will become a fun decoration to celebrate a unique day and tradition.”