The bobbleheads feature a replica of the Statue of Liberty positioned atop the iconic pedestal and star-shaped Fort Wood. Each bobblehead, which plays the full national anthem, is individually numbered with the green version numbered to 18,860 and the copper version numbered to 1,886 to commemorate the year of the Statue’s dedication. The bobbleheads are available exclusively through the National Bobblehead Hall of Fame and Museum’s Online Store. The bobbleheads, which just arrived and ship now, are $30 each or $50 for the set of 2, plus a flat-rate shipping charge of $8 per order. 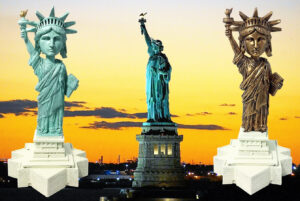 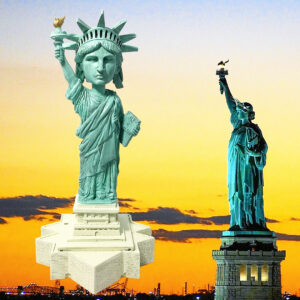 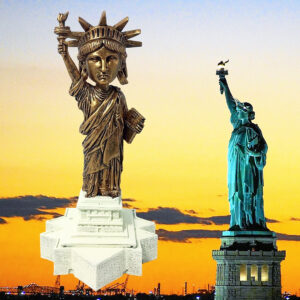 A gift from the people of France to the people of the United States to celebrate the friendship the two endured during the American Revolution, the statue was designed by French sculptor Frederic Auguste Bartholdi and its metal framework was built by Gustave Eiffel. In 350 individual pieces and packed in 214 crates, it arrived in the U.S. aboard the French vessel Isere in 1885. The statue was dedicated on October 28th, 1886 and is located on Liberty Island in the New York Harbor.

Symbolizing the freedom and democracy of the United States, the statue is a figure of Libertas, a robed Roman liberty goddess. She holds a torch above her head with her right hand. In her left, she holds a tablet inscribed July IV MDCCLXXVI which is July 4, 1776, in Roman numerals—the date of the U.S. Declaration of Independence. A broken shackle and chain lays at her feet as she walks forward, commemorating the national abolition of slavery. The statue is seen as a symbol to welcome immigrants arriving by sea.

Until 1901, the Statue of Liberty was the responsibility of the U.S. Lighthouse Board. In 1901, the war department took control. On October 15th, 1924, a Presidential Proclamation declared Fort Wood and the Statue of Liberty a National Monument. Since 1933, it has been maintained by the National Park Service as part of the Statue of Liberty National Monument and is a major tourist attraction. Public access to the balcony around the torch has been barred since 1916, but visitors have access to the statue’s pedestal observation deck, promenade, museum, the area of Fort Wood and Ellis Island. The statue inscription is the Emma Lazarus poem, “The New Colossus.” It was written to help raise money for the construction of the pedestal of the monument in 1883 and was eventually engraved on a bronze plaque in 1903: “Give me your tired, your poor, Your Huddled masses yearning to breathe free, The wretched refuse of your teeming shore. Send these, the homeless, tempest-tost to me, I lift my lamp beside the golden door!”

Lady Liberty was not always the iconic green color that is so recognizable today. The statue was made from copper and iron which gave it a shiny copper color which it first arrived to America Over time, the copper started to oxidize and gradually change color from brown to red to green. By 1920, the statue had completely oxidized and turned green, and experts believe the color will no longer change.

“The iconic Statue of Liberty is a national treasure and symbol of freedom for all Americans,” National Bobblehead Hall of Fame and Museum co-founder and CEO Phil Sklar said. “We are honored to produce these unique, new bobbleheads that people across the world will be able to display with pride.”