MILWAUKEE- This morning, the National Bobblehead Hall of Fame and Museum unveiled limited-edition bobbleheads featuring swimmers Caeleb Dressel and Lydia Jacoby. Dressel is a seven-time Olympic gold medalist and world record-holder in three events while Jacoby won a gold medal in the 100-meter breaststroke as a 17-year-old at the 2020 Summer Olympics in Tokyo. This marks the first bobblehead of both Dressel and Jacoby, and both bobbleheads are being produced by the Museum in conjunction with Dressel and Jacoby. 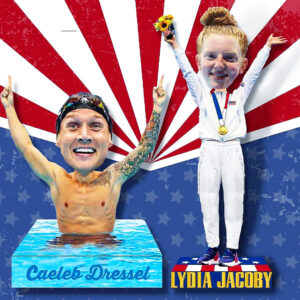 The smiling and wide-eyed Dressel bobblehead, with water up to his waist, is raising his index fingers on both hands over his head, signaling No. 1 after a gold-medal performance in the 100-meter freestyle at the Tokyo Olympics. The base, which bears his name, is transparent. Wearing a white USA warmup jacket and pants, the smiling Jacoby bobblehead has a gold medal around her neck. With her arms extended over her head, she is holding flowers in her right hand as she celebrates her victory in the 100-meter breaststroke in Tokyo. She is standing on a patriotic base bearing her name in metallic gold.

Each bobblehead is individually numbered to 2,020 and they are only available through the National Bobblehead Hall of Fame and Museum’s Online Store. The bobbleheads, which are expected to ship in July, are $30 each plus a flat-rate shipping charge of $8 per order. https://store.bobbleheadhall.com/collections/bobbleheads?aff=11

Billed as the heir to swimming superstar Michael Phelps, Dressel did not disappoint at the 2020 Tokyo Olympics as he emerged as the world’s most dominant swimmer. The 25-year-old Florida native won gold medals in the 50 and 100 freestyle and the 100 butterfly. He was also a member of the 400 freestyle and 400 medley gold-medal relays to become only the fifth American swimmer to win five gold medals in a single Olympic Games since 1970, joining Phelps, Mark Spitz, Eric Heiden, and Matt Biondi. He also became the first swimmer in the history of swimming at the modern Olympic Games to win gold medals in the 50 and 100 freestyle and 100 butterfly at the same Olympics. That pushed his total to seven golds after winning his first two in Rio de Janeiro in the 400 freestyle and 400 medley relays.

A member of the Cali Condors in the International Swimming League, Dressel holds world records in the 100 butterfly (long course and short course), 50 freestyle (short course) and 100 individual medley (short course). Dressel won 10 NCAA titles at the University of Florida from 2015-18. He also won a record seven gold medals at the 2017 World Aquatics Championships, nine medals (six gold) at the 2018 World Swimming Championships and eight medals (six gold) at the 2019 World Aquatics Championships. Also known for his tattoos, Dressel’s bobbleheads will include the face of an alligator on his left forearm, an eagle with the flag of America on his left shoulder, a bear on his upper left arm, and the American flag on his left forearm.

A native of Anchorage, Alaska, Jacoby became the first swimmer from Alaska to qualify for an Olympic Games when she qualified for the 2020 Summer Olympics in the 100-meter breaststroke. The 17-year-old was one of 11 teenage female swimmers to make the team. After ranking third overall after the semifinals with a time of 1:05.72, Jacoby had a winning time of 1:04.95 in the final to garner Team USA’s first gold medal. It was the first medal won by an Alaskan-born swimmer at an Olympic Games. Her time also set a new National Age Group record for American girls in the 17-18-year-old age group. On the final day of competition, Jacoby won a silver medal as part of the 400-meter medley relay. Time magazine later acknowledged her as a “fresh face” highlight of the U.S. swim team at the Olympic Games.

“We are excited to release these bobbleheads of Caeleb Dressel and Lydia Jacoby who have both shined on the world’s biggest staged and inspired so many across the globe,” National Bobblehead Hall of Fame and Museum co-founder and CEO Phil Sklar said. “We think these fans will love these new bobbleheads featured two swimming superstars.”