Wearing a Butler T-shirt with tan slacks and brown shoes, the Hinkle bobblehead is standing on a base bearing his name in front of a replica of Hinkle Fieldhouse, Butler’s home basketball arena. The Hinkle bobblehead is holding a football in his right hand, a baseball in his left hand and a basketball under his left arm. The Butler Bulldog Statue Bobblehead is a replica of the bulldog statue that is proudly displayed outside the entrance of Butler University’s Atherton Union. The statue was a gift from the class of 1996 and is a favorite photo spot on campus.

Born in Logansport, Indiana, Hinkle was a standout three-sport athlete at the University of Chicago. After graduation, he moved on to Butler University where he did it all for the Bulldogs for nearly a half-century. After serving as an assistant coach for five seasons, Hinkle had three stints as the school’s head football coach (1926, 1935-41 and 1946-69), compiling a record of 183-104-16 and winning 17 conference titles. He also had three stints as the school’s head baseball coach (1921-28, 1933-41 and 1946-70), compiling a record of 335-309-3. While he coached three sports, he was primarily known for his two stints as the school’s head basketball coach (1926-42 and 1945-70), compiling a record of 560-392 with 10 conference titles. Hinkle’s 1929 team was crowned as the national champion and he was instrumental in ending the jump ball after every basket rule, and the introduction of the three-second rule. 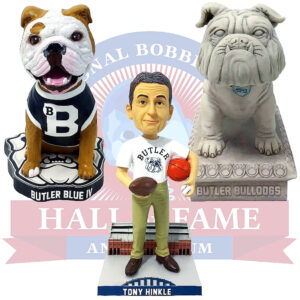 “We are excited to release these bobbleheads of Butler University legend Tony Hinkle and the Butler Bulldog Statue on National Bobblehead Day,” National Bobblehead Hall of Fame and Museum co-founder and CEO Phil Sklar said. “The Butler University community has a deep pride in their school, and these bobbleheads will be must-haves for Bulldog fans of all ages.”