MILWAUKEE – This morning, the National Bobblehead Hall of Fame and Museum unveiled two additional limited edition bobbleheads of former University of Central Florida and current Florida State University quarterback McKenzie Milton. The new bobbleheads feature Milton in white and black jerseys with gold trim while the first version featured Milton in a garnet and gold jersey. Milton previously led the University of Central Florida Knights to a perfect 13-0 season as a sophomore before a devastating injury caused the native of Hawaii to miss the 2019 and 2020 seasons. In December, he was named Mayo Clinic Comeback Player of the Year

The Milton bobbleheads are positioned to throw the football while standing on a football-shaped base bearing his name. Sporting eye black in the shape of a cross, he is wearing a black jersey with white numbers and gold trim in the first bobblehead and a white jersey with black numbers and gold trim in the second. His number 10 jersey has his name on the back. Each bobblehead is individually numbered to 2,022 and they are now available for pre-order through the National Bobblehead Hall of Fame and Museum’s Online Store. The bobbleheads, which are expected to ship to customers in May, are $30 each plus a flat-rate shipping charge of $8 per order. Available here for purchase. https://store.bobbleheadhall.com/collections/bobbleheads/products/mckenziemilton?aff=11 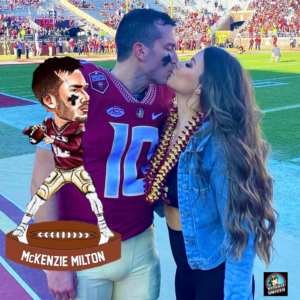 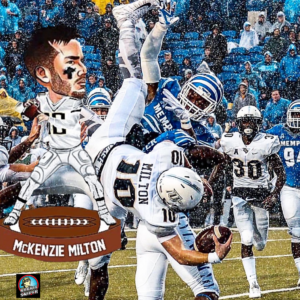 A native of Kapolei, Hawaii, Milton was the Hawaii Gatorade Player of the Year as a senior at Mililani High School in 2014. In 34 career games, he compiled 9,113 yards of total offense (7,303 passing) with 99 touchdowns. Milton played three tremendous seasons at UCF, throwing for 8,683 yards and 72 TDs, and compiling a 27-6 record as a starter. As a sophomore, Milton led the Knights to a 12-0 record in the regular season – two years after the program went 0-12 – and finished eighth in the voting for the Heisman Trophy. In the Peach Bowl, UCF defeated SEC runner-up Auburn, 34-27, before a crowd of 71,109 at Mercedes-Benz Stadium in Atlanta. Milton was selected as the game’s Offensive MVP after passing for 245 yards and two TDs and rushing for 116 yards and one TD.

In the final regular-season game of his junior season against South Florida on November 23rd, 2018, Milton suffered a devastating injury to his right knee, which caused him to miss the 2019 and 2020 seasons. After graduating from UCF and completing a long road to recovery, Milton transferred to FSU to close out his collegiate career. In the 2021 season, he appeared in six games (four starts) and threw for 775 yards and three TDs and was named the ACC’s Brian Piccolo Award winner, which honors the league’s most courageous player. After the season, Florida State accepted an invitation to the 2022 Hula Bowl, which was moved from Honolulu to UCF’s on-campus stadium this year and will be played on Saturday, January 15, 2022.

“Following the release of McKenzie’s bobblehead last week, we’ve been inundated with emails and calls from fans asking for a version with McKenzie in jerseys with the Central Florida colors,” National Bobblehead Hall of Fame and Museum co-founder and CEO Phil Sklar said. “We’re excited to be releasing these two additional bobbleheads for fans. The comeback story of ‘KZ’ is an inspirational one and it was great to see him get back on the field with the Seminoles in 2021 after playing three memorable seasons with the UCF Knights. These bobbleheads are a symbol of resilience and toughness.”