Stephen Curry and the Warriors marched to victory Tuesday night over the Los Angeles Lakers which included Curry’s first triple double of the year. No other than the Bobblehead Hall of Fame is here to honor Steph.

This new Framed Jersey series features some of sports biggest stars and mascots with their jerseys encased in a glass frame behind their bobblehead. Curry’s bobblehead features the point-guard making a celebratory 3-point signal on both hands with his #30 Golden State Warriors jersey in glass behind him. Curry had a career year last season, becoming the NBA scoring champion for the second time averaging 32 points a game. The two-time MVP signed a four-year contract extension in August that will keep him with the Warriors through the 2025-26 season, and he’s looking to lead the Warriors another NBA title after winning the Championship in 2015, 2017 and 2018. 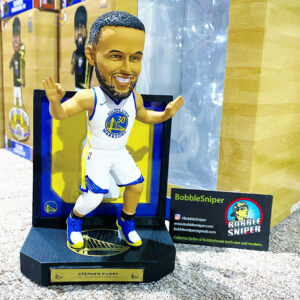 “We’re excited to be releasing this awesome new bobblehead featuring one of the most dynamic players in the world as the 2021-22 NBA season tips off,” National Bobblehead Hall of Fame and Museum co-founder and CEO Phil Sklar said. “Steph has been embraced by fans for his tremendous performance both on and off the field and we think they will love this new bobblehead.”