Each bobblehead will be individually numbered to only 2,021 and they are only available exclusively through the National Bobblehead Hall of Fame and Museum’s Online Store as well as the Butler Bookstore. The Blue I and II bobbleheads just arrived and the Blue IV adult bobblehead is expected to ship in October. The bobbleheads are $25 each plus a flat-rate shipping charge of $8 per order for orders placed online. 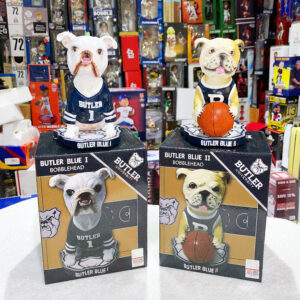 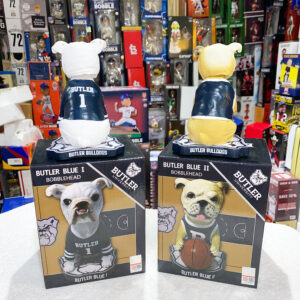 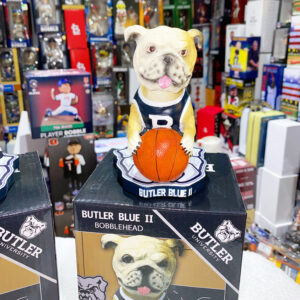 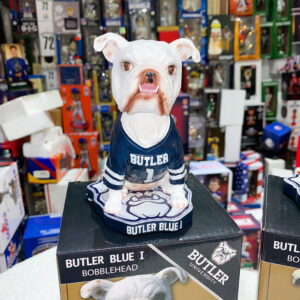 While Butler had many unofficial live mascots over the years, Butler Blue I became the school’s first official live mascot in 2000 and served until 2003. Butler Blue II had the longest length of service from 2004 to 2013. His run included two appearances in the championship game of the Men’s Basketball NCAA Final Four in 2010 and 2011. Butler Blue III (aka “Trip”) served from 2013 to 2020. He remains active in a behind-the-scenes role. Butler Blue IV (aka “Blue) was announced as the successor to retiring Butler Blue III at Hinkle Fieldhouse on January 22nd, 2020. At the same time, Evan Krauss replaced Michael Kaltenmark in the role of mascot handler.

“From Butler Blue I to Butler Blue IV, fans across the country have come to love Butler’s lovable mascots,” National Bobblehead Hall of Fame and Museum co-founder and CEO Phil Sklar said. “We’re excited to be producing this complete set of bobbleheads for Butler fans.”

On Wednesday, July 7th, 2021, Season 2 of the Netflix docuseries Dogs premiered. The hour-long episode features Butler Blue IV and Butler Blue III along with their handlers, Evan Krauss and Michael Kaltenmark. Filmed during the 2019-2020 academic year, the documentary chronicles the transition between the two live mascots and is now streaming to viewers across the world.

Click below to add a Butler Bulldog to your collection.