Rosie O’Donnell is known for her outspoken views on a myriad of topics and also finds herself in much controversy within her career. There’s no denying her T.V. personality, her acting ability, producing ability on a number of shows and her best selling author awards, that put her in a category many women can only imagine.

Back in 1999 when Alexander Global Promotions started the bobblehead craze with their famous Willie Mays bobblehead, word got out that O’Donnell herself wanted in on a bobblehead. According to long lasting employees at AGP, O’Donnell’s reps reached out to the company and sprung the idea of having a bobblehead made of Rosie. They requested that AGP manufactured a bobblehead that displays Rosie on her T.V. show with her sitting behind her desk. The rest is history as the bobblehead never came to fruition as this is the lone one in existence.

First and foremost, this bobblehead has the old school AGP design as it’s heavy as shit and very large. It’s not your standard bobblehead as the weight is literally almost 2lbs. This thing is GIGANTIC! Anyone who collects the older AGP bobbles knows the recognizable green base with the black raised lettering. The replica mahogany desk is very well built and has Rosie’s name front and center. She’s positioned sitting in her T.V. show chair ready to make her loyal fans laugh and entertained. Considering this was manufactured around 1999 or 2000, the facial features are damn near on point as Rosie did have a somewhat of a chubby face. 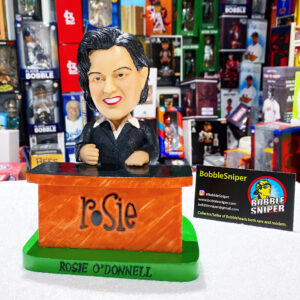 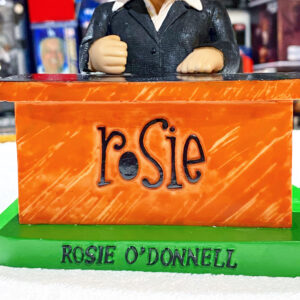 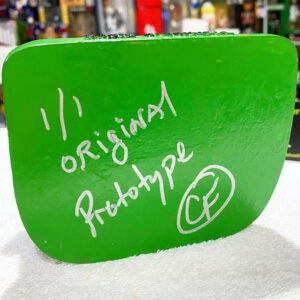 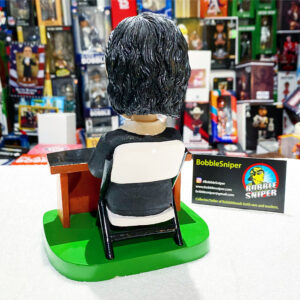 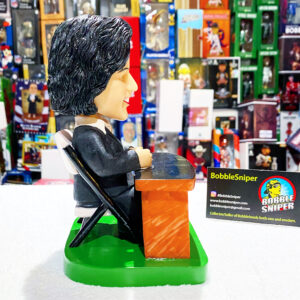 Given this is the only 1 of 1 prototype made and for whatever reason the show didn’t follow through on the request, any Rosie O’Donnell fan would sure love this in their collection. One can only imagine if Rosie’s representatives didn’t back out from this opportunity, this one of a kind bobble would sure be a sentimental collector’s item for any Rosie fan.