How The MLB Trade Deadline Can Affect Your Bobbleheads

The MLB trade deadline can be scary and great at the same time. Your favorite team can get some much needed help to push forward to make a run towards a title and at the same time your heart can be broken. We as fans invest so much time watching our favorite players and if they get traded it can really sting emotionally.

Given the fact that we are all diehard bobblehead collectors and if your favorite player gets traded, where do you go next? What if you are sitting on 14 different Kris Bryant bobbleheads and he packs his bags on his way out of Chicago? If you’re a Cubs fan, it won’t matter. Not one bit. The time you invest in watching your favorite team and player will most likely will symbolize a bittersweet emotion. For example, you know Bryant’s time has run it’s course and ultimately you want the best for him. Cubs fans will ALWAYS remember Kris holding up the championship trophy when the Cubs won the World Series. All of his bobbleheads will forever be engrained in your collection. Not one single Cubs fan will ever forget Kris Bryant. 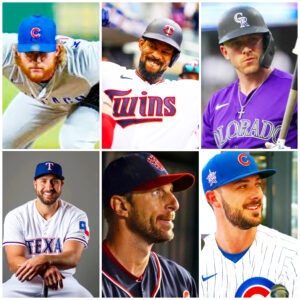 But what if you’re the type of collector that collects all top players and holds onto specific bobbleheads that you want to trade or sell? Well you’re fucked. The value will dramatically decrease the millisecond he gets traded. To think the value will go up is the farthest from the truth. Past listings and being in the game for well over a decade proves this concept as the truth. A Cubs collector will not pay top dollar for a Bryant bobblehead if he gets traded. They will forever remember him but at the same time it’s a time to morn and move on.

The same thing happened to me when Mookie got traded. I still display his 20 different Red Sox and affiliate bobbles with pride, but I wouldn’t think twice about going after another one of his bobbles as soon as he landed in LA. It was time for me to move on but still reflect on what he did for the Sox.

In conclusion, if you have a ton of bobbles of a player who you 100% know will get traded, it’s time to unload. If you want to profit and not be stuck with inventory for years to come, you better head to the Bay and list them. If you don’t have any extras, then display those Trevor Story bobbles in your cabinet in Colorado and those will forever be sentimental items in your heart for what he did as a Rocky.