Another Bernie Viral Moment Leads To Another Creative Bobblehead

This morning, the National Bobblehead Hall of Fame and Museum unveiled two limited-edition bobbleheads of United States Senator Bernie Sanders, commemorating a pair of Senator Sanders’ memorable moments. The new bobbleheads are being released on the first anniversary of the viral Bernie Sanders Inauguration Day Mittens moment. The National Bobblehead Hall of Fame and Museum released a bobblehead commemorating the moment within hours of Bernie going viral at the inauguration. The first bobblehead features Bernie with the bird on his podium and the second features the viral “I am Once Again Asking…” meme.

The Bernie Bird Podium Bobblehead new bobblehead commemorates a viral moment from Bernie’s 2016 campaign. During a rally at the Moda Center in Portland, Oregon, on March 25th, Sanders was interrupted mid-speech when a small bird perched itself on the podium in front of him as the crowd reacted with thunderous applause. The moment later became a viral sensation with the hashtag #BirdieSanders. The bobblehead features a flabbergasted Sanders standing behind a podium and microphone with his arms in the air. He is looking at the bird, which is directly in front of him and next to a sign which reads, “A Future To Believe In – Bernie Sanders.” The base also includes the senator’s name. In addition to Sanders’ head, the bird also bobbles. Each bobblehead is individually numbered to 2,016 and they are only available through the National Bobblehead Hall of Fame and Museum’s Online Store. The bobbleheads, which are expected to ship in June, are $30 each plus a flat-rate shipping charge of $8 per order. Order here…. https://store.bobbleheadhall.com/collections/bobbleheads?aff=11 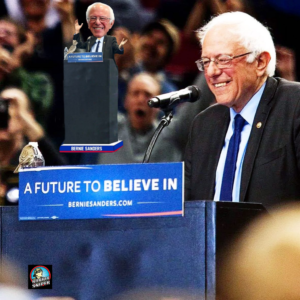 The Bernie “I am Once Again Asking” Bobblehead commemorates a viral meme that originated during Bernie’s 2020 campaign. On December 30th, 2019, Sanders tweeted a short video imploring supporters to donate to his campaign before the Federal Election Commission fundraising deadline. “I am once again asking for your financial support,” he said at the beginning of the video. A screenshot of that phrase became a popular meme imagining various scenarios in which monetary donations or support are being requested. The bobblehead features Sanders in a hooded khaki parka. The backing makes it appear as though he is standing outside. The bottom of the base includes the phrase “I am once again asking” with the remainder of the base painted with chalkboard paint so that the rest of the phrase can be written and changed. Each bobblehead, which includes a piece of chalk, is individually numbered to 2,020 and they are only available through the National Bobblehead Hall of Fame and Museum’s Online Store. The bobbleheads, which are expected to ship in April, are $30 each plus a flat-rate shipping charge of $8 per order.

Political bobbleheads were some of the earliest bobbleheads available for purchase starting in 1960. John F. Kennedy was the first politician captured in bobblehead form and bobbleheads of presidents, candidates, and other political figures have remained popular ever since. Bobbleheads of all 46 United States Presidents have now been produced with the “Neglected Presidents” Series filling in the missing president bobbleheads.

“The Bernie Sanders Inauguration Day Bobbleheads have taken on a life of their own,” National Bobblehead Hall of Fame and Museum co-founder and CEO Phil Sklar said. “Shortly after releasing the original inauguration day bobblehead, we received a lot of requests for bobbleheads featuring the bird moment and the viral meme, and we think fans will love them.”